Nollywood actress Iyabo Ojo, has taken to social media to share adorable and dazzling photos of herself.

The mother of two wore a full Benin bridal look for The Real Housewives of Lagos reunion show.

In the caption, the actress revealed the look was inspired by her maternal grandmother who hailed from Edo State.

Iyabo Ojo is a boss when it comes to pulling off pure elegance in attention-commanding traditional looks and this time is yet another reminder.

The actress wore a cultural look for the reunion show.

The Nollywood actress who is part of the 6 main characters of The Real Housewives of Lagos, turned up for the reunion show looking like pure royalty in a richly put-together traditional look inspired by the Benin culture of Edo state. 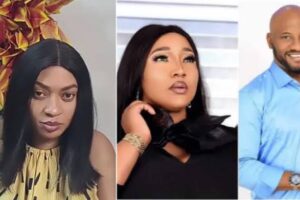